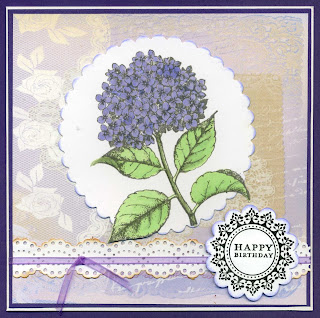 Can't believe it's over a week since I put anything on my blog. I have been very busy crafting but not anything to put on here.  A couple of weeks ago I was moaning about having loads of cards and didn't know what to do with them, the neighbour I was talking to suggested I put them in the local hairdressers to sell but I'm not good at selling my cards, never think anyone will want them, however she went ahead and asked them if I could sell them for our charity and they said yes.I took a box full down there and within four days they were on the phone asking if I had anymore - panic !! I rustled up another batch and took them down and now they are wanting more ! then my "egg lady" who calls once a week found out I was doing them and asked for a dozen assorted cards , whoo its very nice but as it takes me approximately a couple of hours a card time is in short supply. This is one of the simpler ones but even this takes a while with the stamping, colouring,punching etc. I'm having a day off from it tomorrow, off  to Samuel Taylor's in the morning and Craftwork Cards in the afternoon with a pub lunch in the middle. Just putting this on Make It Monday's challenge which is , as always Anything goes