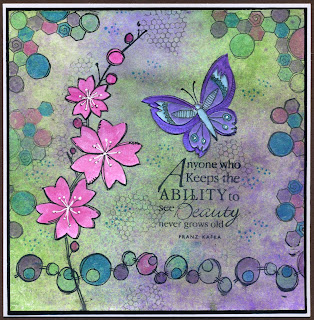 Browsing about last night I saw that Try It On Tuesday's challenge is Add a Quote, I love quote stamps and have quite a collection but they don't get used often enough, after saying that I ended up using quite a simple one from Hobby Arts Sunny Day Greetings set, took the opportunity to get messy with my homemade ink sprays again, its a pity that the lovely sheen doesn't show up on here,the three I've used were made with Luna lights paints.  All the stamps used are Paperartsy except the quote, coloured everything with distress inks, fussy cut and layered the flowers and the butterfly and added a bit of white pen to the flowers.

Try It On Tuesday  - Add a quote

Anything but cute     - crazy for colour

Butterfly Challenge - margins/mint plus butterfly (s) -hope I have enough green
Posted by Joan at 22:42 11 comments: 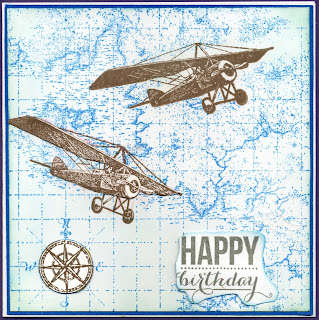 This weeks challenge at Cardz4guyz is chosen by Helen,  who asks for something beginning with A. For my card  I stamped the old aeroplane twice, masked it and then overstamped with a cover a card map stamp,  Hope you will join is this week with something suitably masculine for our challenge. 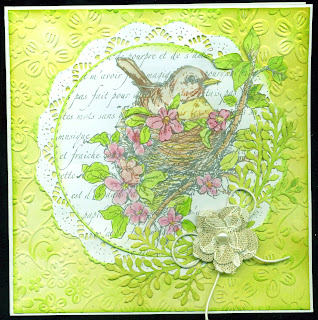 This is one of the cards I nearly threw in the bin, I love this stamp but never seem to be able to make a decent card with it, however I have persevered and finally finished it.  Think I've been a bit heavy handed with the Twisted Citrin ink but its such a lovely spring colour. Cheery Lynn doily die and Creative expression delicate fronds die.,lace flower from stash.

Fantasy Stampers - In the Springtime

Eureka Stamps - Spring is in the air 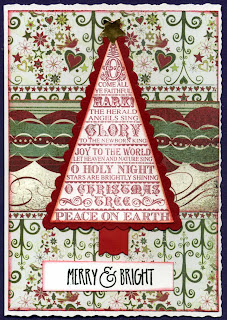 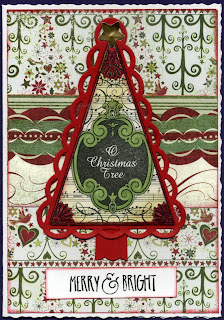 I've had all the Easter weekend to craft and guess what?  Mr Mojo took off for a holiday and left me
without any inspiration whatsoever, I have made a couple of other cards but they are so dire they may end up in the bin!   These two cards are made entirely with odds and ends from my Christmas left over box.  For some reason I had stamped a load of these Justrite Christmas trees in several sizes and also die cut the shapes too, must have had some idea in my head at the time.  The background paper is also from the scrapbox, merry and bright stamp a freebie from Creative Stamping. I'd like to enter these challenges 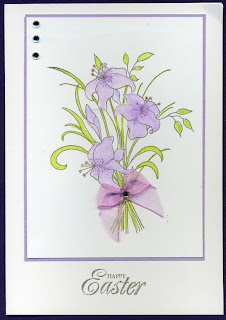 Hope everyone has a lovely Easter Weekend.  I have used an old Butterfly Kisses stamp for my card,coloured with water colour pencils, very simple. I'd like to enter a couple of challenges 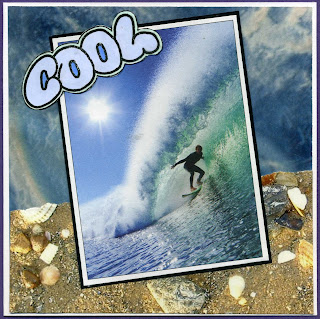 Challenge 112 at cardz4guyz this week is teenage kicks so lets see something for the teenage guy in your life.  I had planned on using my new Graffiti stamps for this challenge but fellow DT member  Julie was quicker off the mark with her fabulous card so needed a quick rethink. After lots of searching found this surfer image in an old (very old!) making cards magazine, the papers are from another very old scrapbook magazine which I think has long been long gone , oh yes it does pay to hoard LOL !
Posted by Joan at 09:00 4 comments: 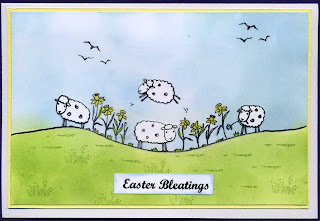 Ever had one of those days when you think you should have stayed in bed ?  today I've dropped things, spilt things, ben unable to open things and seeming can't even make a simple little card without having several goes at it, this final offering has wonky lines and uneven borders but as I always tell other people, its hand made don't expect perfection LOL.  I got this little stamp at the York show  ( don't know if anyone else went but I was thoroughly disappointed with it and won't be going there again )  not my usual kind of stamp but I thought they were quite sweet. 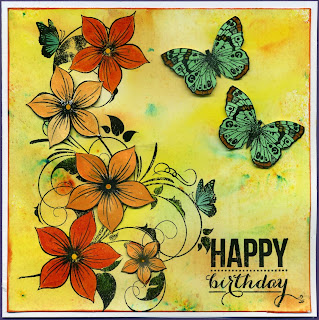 Haven't been around my blog much recently as I seem to have had one thing after another, first started with shingles, then a bit of a flare up with my rheumatoid arthritis and now I seem to have done something to my ankle, thing I've pulled a tendon or something, all I know is it hurts !  Anyhow this afternoon I got out the brushos and a new stamp from Honeydoo and had a play, Brusho background and everything else painted with the same brusho colours, I wasn't sure about it while I was making it as I thought maybe the colours were too bright but by the time I finished it I was happy with it. Going to put it in these challenges 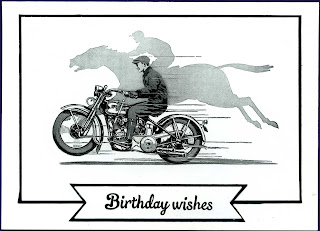 Caz has chosen the theme of Speed for challenge 111 on cardz4guyz.  I had forgotten to make a DT card for this weeks challenge so had to come up with a speedy card too.  I have had this image on my computer for a while, I think its an old advert for Harley Davison bikes but to me it epitomises speed. I did try some DP behind the image but they distracted from it too much so decided to go with completely CAS this time. Hope to see your masculine makes on our challenge this week.
Posted by Joan at 09:00 4 comments: 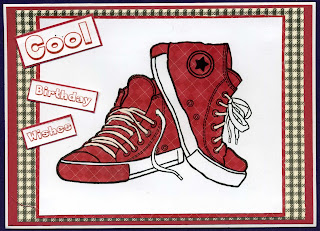 Challenge 110 over at Caz4guyzrd and this week Sharon has chosen Paper Piecing. I'm normally paper piecing more feminine things like dresses, shoes and flowers so I was a little stumped for a bit until I remembered this Woodware stamp I bought a while ago and hadn't got round to using.Paper pieced the sneakers with scraps from my overflowing scrap box and recoloured the laces with my Posca white pen. Computer generated the words, background papers also from said scrapbox.Hope to see you on our challenge


This month at Stamping Sensations our challenge is Flower Power, I'm sure you've all got lovely flower stamps so hope to see you on our challenge, we are a stamping challenge so you must make stamps your main focal point ! Our sponsors this month are Be Creative who are offering this lovely prize 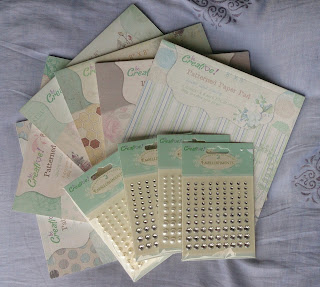 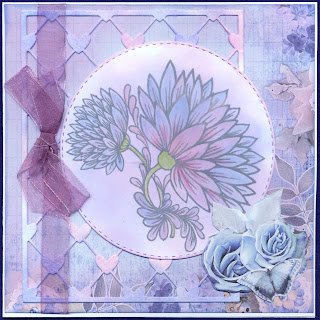 The flower and the die cut are coloured with Memento inks and I'v also inked the edges of the papers with the same inks.
Posted by Joan at 09:00 7 comments:


I've been feeling a bit fed up making cards recently so I've been playing about doing a few different things.  I have a bad habit of buying MDF things and never doing anything with them , So........ I've been messing about and using up some stuff.  Firstly I made up a clock kit that I bought last year but it still doesn't look quite finished so its waiting for a little bit more inspiration to happen.  Then I found a money box I bought at least three years ago and for some reason I had painted it pink ! Here it is with its first coat of black acrylic paint 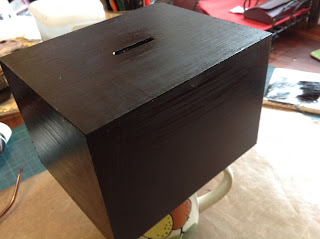 Then I covered it with papers from Tim Holtz French Industrial paper pad. 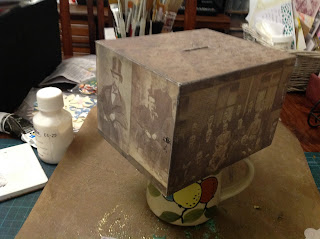 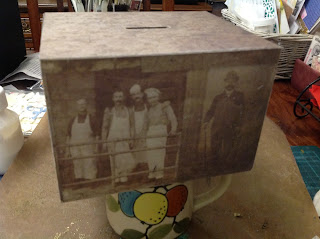 Found some chipboard letters and used them to put my OH initials on after covering them with Utee to try and make them look like metal ( not very convincing though !) 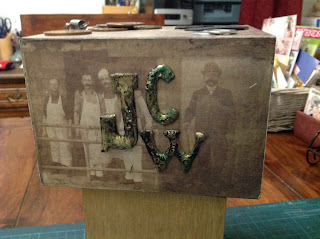 I knew what I wanted to do on the top so went into the garage and helped myself to some old pennies from the tin full that gets used as a doorstop, added some washers and a couple of little springs, the idea being to make it look as though he had emptied his pockets of the usual junk that gets left on the bedside drawers ! 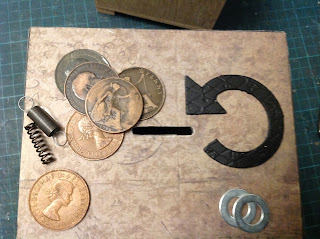 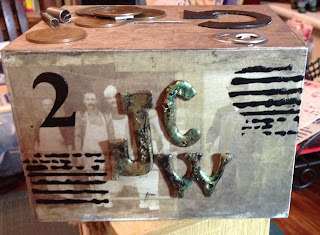 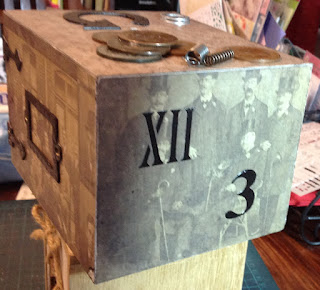 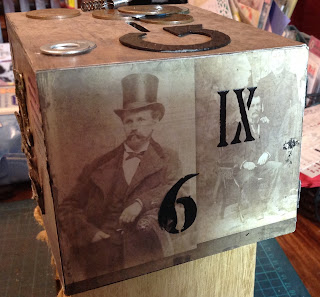 If anyone has managed to stick to the end of this post LOL I'm entering it into
Countryview Challenges -    which is Industrial ,   not sure if its appropriate as my "metal" isn't very convincing but I have really enjoyed  making it ! 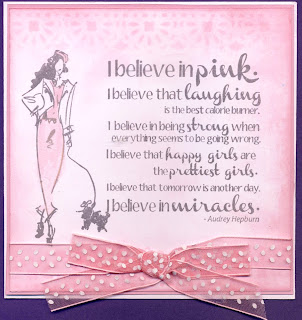 Most people who know me know that I'm not really into pink, fluffy sort of stuff and certainly not pink !  However there is always an exception to the rule and so I've made a pink card albeit not fluffy. I have had this saying stamp for ages part of an Artistic Outpost set of quotes  just added the Run Way girl, bit of inking, stencilling and ribbon There are several challenges that I think my card may be appropriate for so I'm entering into these:

Alphabet challenge- A for anything pink

In the Pink - For a special lady

Try It On Tuesday - Feminine and fancy 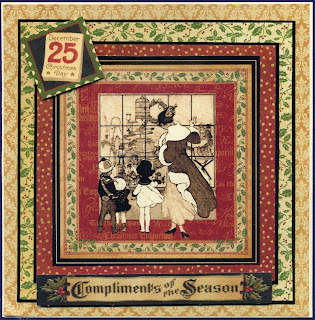 It's my turn to choose the challenge this month at Christmas Sparkles and I've chosen the theme of Old Fashioned Christmas.  I do like traditional Christmas cards and for my card this time everything I've used is from Graphic 45 Christmas pad, love their papers.

This month we are sponsored by
Bugaboo

Make Your Own Background 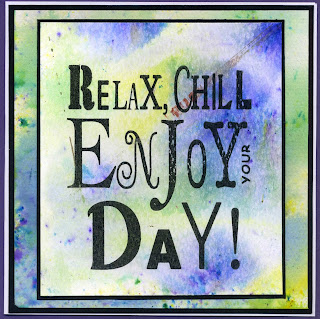 For challenge 109 at Cardz4guyz it's my turn to choose the challenge and I've gone for "Make Your Own Backgrounds"  this is one of my favourites as I am more inclined to make my own backgrounds than go for designer papers.  For my card I have gone with my Brushos, love the unpredictabilty of them and the fact that no two pieces are ever alike. I have just got the new colours but not played with them yet, these two pieces are make with my original set.  The stamp is a Woodware and while it makes a great masculine card it would be equally at home on a feminine card with different colours and a flower or too. Hope to see you on our challenge.