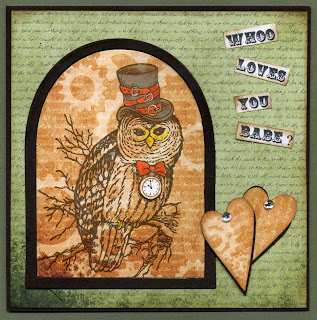 I'll be the first to admit that I don't do "romance" or valentines, In over 50 years I have only ever had one valentine card from my husband and that was only because our daughter got a box of valentines given at a trade fair and made him write one for me ! I have to send hime to the shop the day before my birthday and "order" him to buy me a birthday card but that's just how he is.  I didn't want to miss doing Fashionable stamping challenge as I have done it every week since it started to made this and hope it "shows some love"
Posted by Joan at 22:57 8 comments: 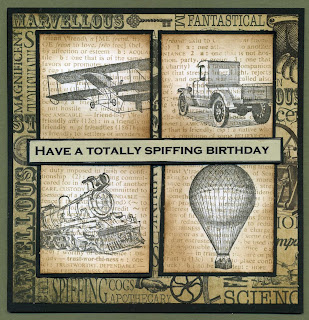 Picked up this set of Hero stamps at Embsey Crafts last Friday, there's also a train and a penny farthing plus other bits and bobs so think they will be very useful for all the masculine cards I need to make for next month and March. The background is a piece of Chronology paper and the sentiment (the crooked sentiment!) is computer generated. This card is for one of the adult grandsons.A few challenges: 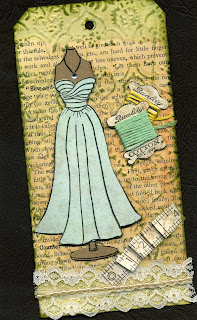 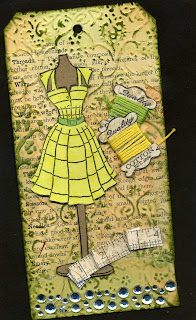 Thought I would make a tag for a change, haven't done any for ages, used some old pages from a needlework book ( one I got from a jumble sale and the pages are already falling out so no guilt !)
Embossed with damask folder, two very old dress form stamps which I paper pieced, a few bits of stamped sewing bits and a bit of bling. Made these for Dragons Dreams challenge. 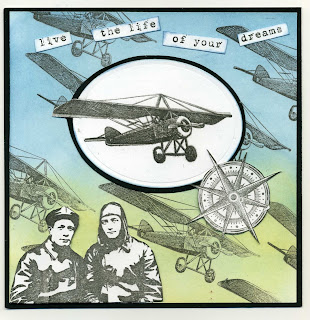 Only managed the plane bit of the Fashionable Stamping challenge of planes,trains and automobiles, I did try several times to incorporate more than one but ended up with just the planes. The plane is Artemio .compass is Indigo blu (I think) and the guys are Artistic Outpost,background coloured with pan pastels. Still not back in the card making mode and I have a load of birthdays coming up next month so I do need to get going.

Fashionable Stamping - planes,trains and automobiles
Cards For Men - Transport
Make in Monday - Anything goes
Posted by Joan at 21:21 15 comments: 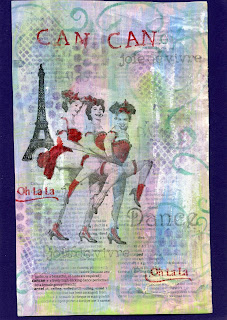 Another dictionary page for the Craft Barn challenge, good way to while away a very snowy afternoon playing with paints and inks. One thing I know is that if I am going to continue with this challenge I need some more stencils! apart from the flourishes what I've used on here is a bit of sequin waste and a bit of plasterers jointing tape. I can't remember whose stamp it is, I've had it quite a while,the tower and the words are from various sets. I still can't bring myself to use the new dictionary I bought especially so its another page from a very old tattered,falling to bits one. I was brought up to respect books and even though I have bought a few old hard backs with the idea of ripping them up they are still sitting on my bookshelf.

Just wanted to welcome my new followers, I really appreciate that you want to look in on my blog and I hope you like what you find here.
Posted by Joan at 17:31 1 comment: 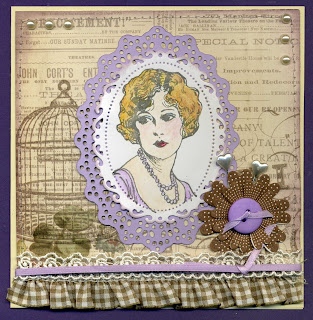 After spending a few days making masculine type cards I thought I'd have a change and do something feminine. Using an old stamp from a Non Sequiteur set and some lace,ribbons etc from my stash which is overflowing its storage and needs to be used instead of looked at. I don't know what made me think it was a good idea to sew on my card, I can sew a perfectly straight seam on material but give me a piece of card and its like a donkey's hind leg! This card is for Our Creative Corner - Shabby Chic so I'm saying the sewing is the shabby bit of it.

Our Creative Corner - Shabby Chic
Make My Monday - die cuts and punches
Try It On Tuesday - Lets get stitchy
Simon Says Stamp and Show - Lace love
Make It Monday - anything goes
Posted by Joan at 17:09 11 comments: 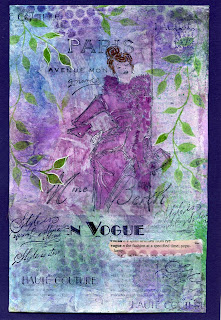 Tonight I decided to abandon struggling to make cards which I really didn't feel like doing ,is it the end of the earth if I actually have to go out and buy a couple of cards ? and if I wasn't so darn picky about what I send to whom I have a load of cards in my box which would do if I don't get these ones done. Anyhow I have been wanting to do an altered dictionary for ages so today I bought a cheap one from the works, however when I came to try and work in it its so thick it won't stay open so I think I need to gut some of the pages before I start, as I wanted to enter the Craft Barn challenge I tore a page out of another old dictionary and used that, if I manage to complete the alphabet I will put them in some kind of book or binder, only 25 more to go ! I stuck the page to a piece of card and streaked gesso over it and then sprayed with various Crafty Notions colours. Stamped Mme Berth on tissue paper and stuck it on with glue'n'seal,coloured her with distress inks,stencilled the vines and sequin waste and stamped a few fashion words.I had put masking tape over the word Vogue and for a horrible minute I thought it would not come off without tearing the words off. 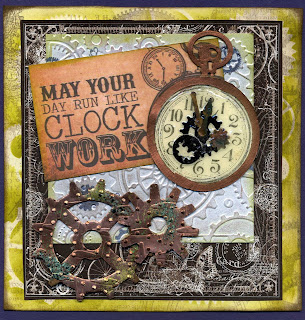 Don't seem to be getting much crafting done at the moment, too busy with other things but I did manage to make this bit of steampunkery, its another page for my steampunk book, haven't done any for ages. Spurred on by my acquisition of xcuts watch dies some of which I used for the watch on here,the actual face is an Elusive images stamp. I don't usually buy toppers but I was lured by the
Papermania chronolgy ones, I'm waiting for the papers and some other bits and pieces to arrive.Entering it on a couple of challenges

Artful times - two or more embossing folders - the silver square with the steampunk folder and the cogs are embossed with swiss dots folder and another one that I can't rember the name of.

whoops! missed the Make it monday ! thought I had another day to go. 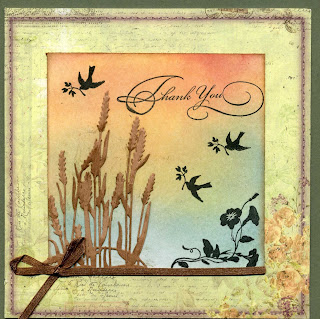 A thank you card for the friend who sent me this lovely spellbinders die for Christmas. The stamps are from an old Inkadinkado set

Addicted to Stamps And More - Nature

loves rubber stamps - use dies or punches
Posted by Joan at 23:28 15 comments: 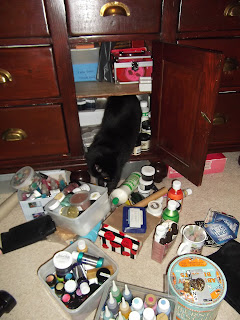 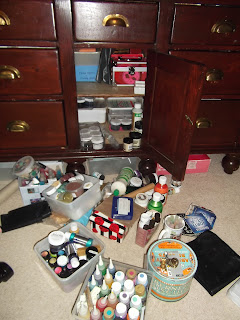 The top picture is my little cat investigating the mess on the floor,looking at all that stuff I dragged out its hard to believe it was all in that little cupboard which still looks full, bet I'll have a job getting it all back in, all because I wanted to find some copper ultra embossing powder. Several lots of moonshadow and starburst stains in there which I haven't used for ages, think I need to have another play with them, I do need to use up some of this stuff !
Posted by Joan at 23:01 2 comments: 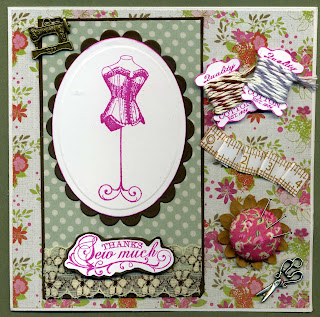 Made this thank you card for a friend who has now received it so I can show it, I've been looking for a challenge for thank you cards but couldn't see any . The stamps I've used are new (free with a craft mag)
love the little thread cards. The pin cushion is a fabric earring with the post cut off , I got 3 prs on a card from Primark last year, think they were about 50p, knew I would use them for something one day)I have a feeling the papers are from a free pad too, real cheap skate me ! Two charms from my stash, I have resolved to use my charms instead of hoarding them 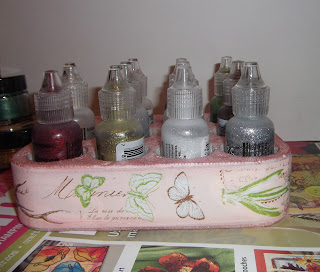 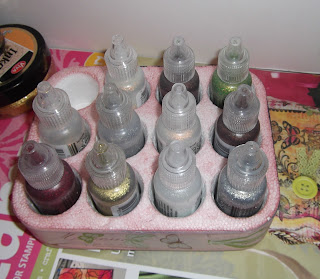 This was supposed to be a before and after post but my camera decided to delete the before photos ! it deleted all my photos at Christmas and I thought it was a one of and maybe I had pressed a wrong button but its happened again tonight, don't know if its the camera or the memory card but will have to get it sorted.
While I was waiting to be served in our little village shop I spotted a polystyrene block that had held Steradent denture tablets, hmmm, me thought, that looks like my stickles bottles would fit in it. Once home I took off the band with the name on it, turned it inside out to hide the writing, put it back on, covered it with washi tape and dabbed some distress ink round the edges.  Now I think i need some more to hold distress re-inkers, they fit nicely too!
Posted by Joan at 22:31 4 comments:

Thank you to all who posted replies to my help plea ,  I managed to do it using Google Chrome in the end
Posted by Joan at 00:56 2 comments: 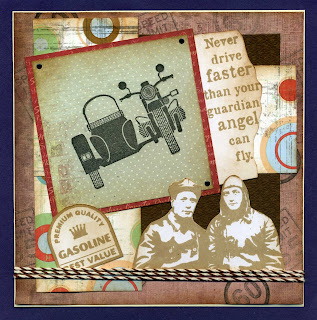 Whoo, what a palaver to get this onto my blog ! done it through Google Chrome in the end, I see its a known fault on blogger so hope they get it fixed double quick. Made this card with my new Artistic Outpost  Diesel Punk stamps that my lovely sister bought me for Christmas along with a heap of other stuff, she really spoils me !
When we were kids my parents had a motor bike and side car and all four of us kids crammed in the sidecar and off we went to the seaside or where ever, no health and safety in those days! Somewhere I have a photo of us in it but couldn't find it tonight.  I made this card for a couple of challenges

Where has the browse button gone, anyone tell me how to upload my photos now ?
Posted by Joan at 00:02 3 comments: 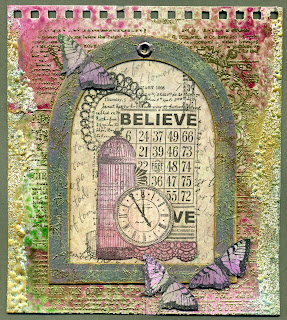