Oh dear I've had a dis arrrster darlings and broken my cuttlebug !  OH took it to bits this afternoon and I've actually smashed a metal piece in half, thats what you get with over shimming !! Its been an amazing piece of kit, my sister bought it for me in the very early days of cuttlebugs and its really had some hammer over the years. Now my real dilemma is :- do I buy another bug which was my first thought or should it be a Big shot ?  I've seen Big shots for sale cheaper or as cheap as the bug but I've never used a Big Shot, do they do everything a cuttlebug does ?  I almost went for a Grand Caliber but saw somewhere that you cannot use Sizzex dies with them, as I have quite a lot of them that rules the Caliber out, any helpful comments gratefully received !
Posted by Joan at 17:34 9 comments: 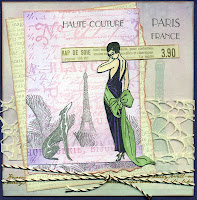 Taken a little break from Christmas cards again,  can't get my head round making anything else at the moment , its only the end of October and I'm well ahead of myself this year, the only problem with doing them early is when it gets closer to Christmas and I start seeing all the gorgeous cards other people have done I feel like starting all over again!.

Used another piece of craftwork cards French paper, it was green so altered it a bit with pink and lilac pan pastels so it blended in a bit better, this time I did manage to leave some of the Eiffel  Tower showing. The lady .dog ,palm and wording are from an old non sequeteur set, stamped tower is Clarity stamp and of course the background text is Tim Holtz 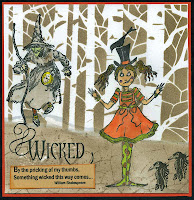 Almost Halloween again. Its not something I'm really into and I don't have much in the way of stamps but I thought this Off the Wall girl stamp looks a bit hallow'eeny with her top hat and bird.The witch stamp is from last year and the background is a  crafter's workshop stencil. Tonight the central heating boiler has decided to stop working so no heating and no hot water, typical,  just as they have forecast cold weather this week, tomorrow I will have to try to find someone to look at it, the man who used to do it has retired, I hate having to find someone new ! We are fortunate that we have family members who are joiners/builders/mechanics etc but no plumbers or electricians, wonder if we can talk any of the grandsons into taking up a trade ? mind you by the time they qualified it would probably be too late for us ......... 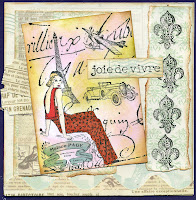 A bit late in the week for Make my Monday challenge but I'm having a hard job putting my mind to anything but Christmas cards at the moment plus I'm struggling with this horrible cough that's keeping me awake all night so the old brain is feeling a bit fuzzy ! I had another stamp in mind for this challenge but someone pipped me to the post with it, anyhow I found this Diva languishing in a box of oldish stamps so gave her an airing, after I had almost finished the card I realised I had not got any Fleur-De-Lys which was what its all about, so stamped some down the side of the card on a bit of paper which unfortunately covered up the Eiffel tower, ever get the feeling some cards are really not meant to be ?  Oh well back to the Santas, reindeers and glitter !!

Do You Stack Up - Vintage
Make It Monday - anything goes
Posted by Joan at 23:05 4 comments:

The Old and the new 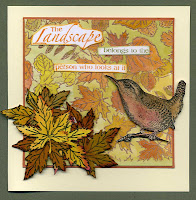 Last night I thought I would try stamping this little wren who is another new stamp from Harrogate show, I was a tad disappointed with it as it looked so dull so I used a bit of artistic licence and added a bit of red to liven him up, a lot of the challenges last week were for autumnal themes so thought I would go with that, well the first couple of attempts ended in the bin and so I went off to bed and lay there awake most of the night coughing, some kind person has passed on their germs to me ( I know the culprit ,wait until I see her !)  Anyhow this afternoon I had another play,  the background stamp I used here is ancient, its a Carolines texture mat and I've had it for ever, I also used some very,very old bronze embossing powder which still works fine even though it smells 'orrible !!!  the leaf stamp is also old, I think it might have been an old Craft Stamper one ? coloured it all with distress inks. Although I've put it on a card here its actually a 4x4 piece and I will probably take it off the card and put it into my fat book as I don't think I would send it to anyone I know. Anyhow putting it on these challenges 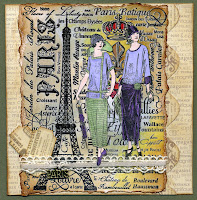 Tonight I thought I'd have  a break from making Christmas cards and use my new Justrite Paris background stamp and I'm loving it!  stamps beautifully, this time I've used the whole stamp but can see it being useful just using parts of it, the two crafty individual ladies are enjoying their Paris trip I'm sure.  Had a lovely day at the Harrogate GNP last Saturday and enjoyed meeting up with some bloggers again and also ones I hadn't met before, its always lovely to meet people who I have only known on line before, also caught up with several other craft people who I don't see very often now I don't get to the Craft club I used to go to. Came home with far too much new stash again considering I had already over indulged at Port Sunlight the week before, so many stamps, so little time !!!!
Entering it on  these challenges

Make It Monday - Always anything goes

Pile It On Challenge - vintage or shabby chic 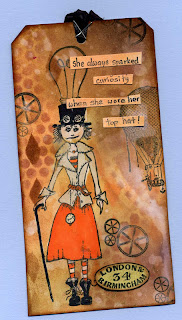 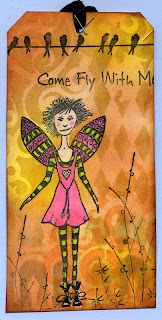 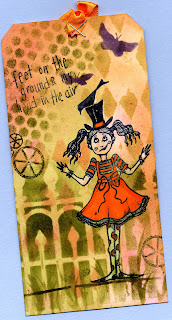 Well I don't know where this week went, can't believe I haven't blogged for a week.  Had a great day at Port Sunlight and despite all my resolutions bought several more Christmas stamps, thats whats been occupying me all week, I have made quite a stack of Christmas cards. I have been asked to do a Christmas stall and at first I thought I would but now I'm having second thoughts about it, don't think I can make enough and also make my own cards, I'm hoping to get my cards done earlier than last year so I can enjoy doing stuff later on instead of rushing to finish things.  Anyhow today I finally decided to have a play with these Off the wall stamps from Lindsey Mason, I've got nice and inky playing with stencils etc,used Lindsey's technique of masking the images with glue'n'seal, haven't got it perfect but it works really well. Anyone going to GNP show at Harrogate ?   Haven't done these for any challenges, just for fun ! Blogger won't let me put them in row so have to leave them like this.﻿
Posted by Joan at 23:48 7 comments: