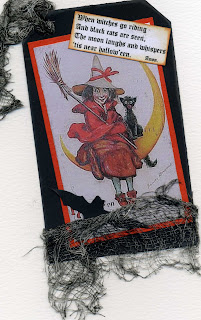 I wanted to post this on a couple of challenges but think I was too late on Something Completely Different but I entered it anyway. Its also for Tag Tuesday. I love this image of a witch and especially the cat ! I found the image on Magic Moonlight Free Images. Couldn't really do anything much other than layer it up on orange and black card as the image already says it all. Drew the bat on a bit of black card and cut it out. Wording done on computer. The gauzy stuff at the bottom is some kind of dressing,came out of an old first aid box, knew it would come in useful one day, of course it was white originally, coloured it with my versamagic ink pad (I,ve got very black fingers too )
Posted by Joan at 23:50