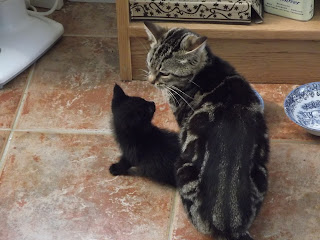 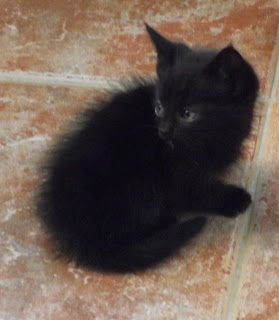 Well this is the reason for no crafting at the moment !  Yesterday we found this cat and kitten in the  undergrowth down a little country lane. We had parked to walk into the woods when mommy cat appeared wailing pitiously, after a few minutes we realised there was more miouws coming from the nettles and brambles and after scrabbling about I found a tiny little black kitten. There were no houses nearby so we ended up putting them in the car and bring them home. They were both ravenous,gulping down food like they had not  eaten for days and they are both very thin, the kitten is just skin and bones. How they got there we don't know unless someone dumped them. The mother cat is hardly more than a kitten herself. We will ask around the neighbourhood to see if anyone claims them but otherwise they will have a good and loving home with us.(ps; we did go back later to see if there were anymore kittens but no signs of any)
Posted by Joan at 23:03